The EnTrust project has published its first European Policy Brief on the theoretical and normative underpinnings of trust and distrust in governance.

Based on the findings of its preliminary research on the state of scientific research on trust and distrust in governance and a policy dialogue organised last June on trust and distrust at EU level, the policy brief explores current challenges and perspectives on EU Governance. These include: a decline in the rule of law and increased corruption in some EU countries affecting the freedom of the media and the capacity of civil society organisations to hold their government accountable, the impact of Covid 19 pandemic on governance, increased polarisation in our societies, spreading of fake news and unethical behaviour in science.

In order to respond to the challenges that our society faces, which undermine trust in governance, we believe that the European Union has to build a new narrative of ownership and civic participation grounded in fundamental rights. Europe needs to nurture and develop a culture of participation where citizens are recognised as equal partners of institutions, and an effective civil dialogue is promoted in all the different areas of policy and legislative action, and at transversal level. Being able to express concerns and proposals, as well as learning from the perspectives of policy makers and other stakeholders, also contributes to a sense of ownership and responsibility, and ultimately a sense of trust.

Critical citizenship, free and independent media, effective rule of law are an essential prerequisite of fully-functioning democracies. What is thus required is a narrative that highlights the complementarity of enlightened trust and distrust, which are based on principles of active and critical citizenship, political deliberation and decision-making.

The new narrative has to stress that enlightened forms of trust involve reciprocal involvement of both citizens and political institutions, which in turn become the subject and object of trust. Additionally, other actors such as the media, social partners, civil society, experts and science contribute as mediators in the development of trust and distrust relations.

Furthering enlightened forms of trust implies advocating for a participatory and critical approach from the grassroots level up to the arena of the European Union. This is ever more relevant in the context of the upcoming conference on the Future of Europe and of the adoption of a European Democracy Action Plan.

The Policy Brief identifies 6 key steps in order to promote and implement participation and ownership in political governance. 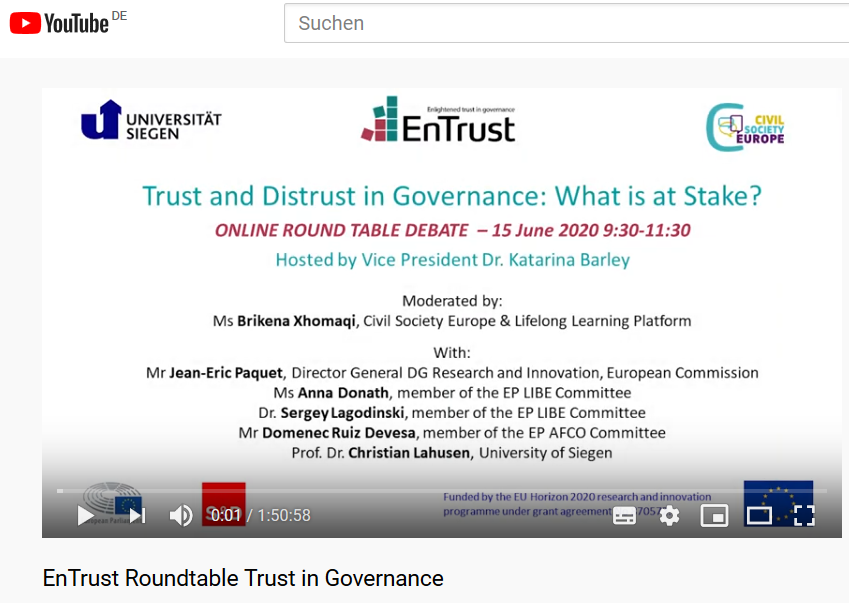 Our online round table debate on Trust and Distrust in Governance: What is at Stake? is now published in full lenght on our EnTrust project YouTube channel. The event was hosted by Katarina Barley, Vice President of the European Parliament, and included a high level panel with the Director General of DG Research and Innovation […] 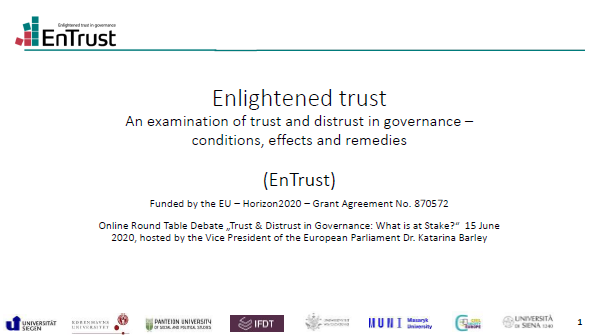 To learn more about the project, we invite you to have a look at the project presentation by coordinator Christian Lahusen on the occasion of the online round table debate “Trust and Distrust in Governance: What is at Stake” on 15 June 2020.

This project has received funding from the European Union’s Horizon 2020 research and innovation programme under grant agreement No 870572. The contents of this website are the sole responsibility of the authors and do not necessarily reflect the opinion of the European Union.